Back to page
View source

Cara is the romantic pair between Cal and Tara Duncan.They have not yet become a official couple,but Cal has shown feelings for Tara in many episodes as Tara does for Cal.

However, it should be noted that as of the tenth book in the Tara Duncan book series, Cal and Tara are together.

Tara and Cal appear to care a lot for each other. They often argue or tease each other, but it only appears to make their relationship stronger. It is not clear whether they will ever be a couple, but the producers have clarified that while the animated series is based off the books, many aspects of the novel will not be in the show; meaning that Cal and Tara is a possibility. In many episodes, one (and sometimes, maybe both) is jealous of the other being with another person.

When Aquaphonis screams for help with Tara's voice, Cal immediately runs to Aquaphonis, thinking that it is Tara in danger.

In the episode "Volcan Heart", it's Valentines Day. Tara wishes to have a Valentine in the beginning, and Cal attempts to comply with her wish for the rest of the episode (trying to write a poem of her beauty, buying her flowers, purchasing chocolates, and turning his video shop into a "temple of love"). However, in the end, Manitou interrupts their moment at the end of the episode. It can also be noted that upon watching for Manitou's return, Tara fell asleep on Cal.

In "Mer-made" it is revealed that Lorelei, the villain of that episode, was a close childhood friend of Cal's. Tara and Lorelei appear to have a sort of rivalry between them. Notably, the rivalry is because of Cal. Lorelei was once his best friend and is jealous that Tara has taken her place; she also blames Tara for Cal not returning to Other World. At one point, while arguing with Cal, she mockingly refers to her as "Precious Tara".

Meanwhile, Tara is angered when it seems that Cal knows Lorelei enough to the point that he would hide her with an opaquis spell from the Alpha Team. Also, when Lorelei poisons Tara so that she becomes a mermaid, Cal expresses concern; however, he appears to like her in her mermaid form as well, commenting that she looks "cute".

Finally, in the final showdown between Lorelei and Tara, Cal jumps in front of Tara to take the heat of an intense torturous spell from Lorelei. Both girls express extreme guilt (Lorelei agreeing to go back to other world if he woke

up and would be all right), and Tara regrets yelling at him earlier (telling him after he refused to answer about Lorelei that she'd rather "hang with the fishes") and begs him to wake up. Cal then "wakes" up (he over dramatized his reaction to the spell to get both girls to "come clean") and Tara, despite being angry at his trickery, is relieved.

In "Clairvoyant", Tara is quick to be jealous with Claire when Cal comments on "knowing her from somewhere." However, after seeing Fabrice and Claire together, as well as realizing that she and Claire have a lot in common, ceases her jealousy; the two bond to the point that their friendship rivals Tara and Sparrow's. Cal is homesick in this episode and seriously wishes to return to Other World (which Chem then tells him will be permanent if he leaves Earth at all). Tara is seriously upset with him ( he claimed that "something wasn't right about Claire") and ends up in an intense argument with him.

After catching him looking up Claire in the living stone, Tara explodes and tells Cal "to go back to Other World" because she "sure did not know where the real Cal was!" . She slams her bedroom door as she leaves, and a picture of her and Cal shatters right between the photograph versions of them (Tara is laughing and Cal is smiling while his arm is notably around her shoulders). It can be noted that Cal is more determined to prove Claire's obvious guilt after his intense argument with Tara.

Meanwhile, Tara confides in Sparrow about Cal, expressing confusion in his recent actions. Sparrow then advises Tara to look at things through Cal's eyes, and Tara is quiet for a few moments. Seemingly, Tara has taken Sparrow's advice, because despite being mad at Cal (and ignoring him earlier), she answers when he calls her. Claire is revealed to be Cal's former classmate from his thief school on Other World (hence why he recognized her) who was kicked out because "she wasn't very good" (according to Cal). Master Chem arrives to take her away and asks Cal if he wishes to come along. Though both Tara and Sparrow pout and make sad faces, Cal notably looks at Tara a lot longer before declaring, "Are you kidding? Who could ever turn down THIS job? Chasing down semchanachs with two foxy spellbinders. Man, I love this job!" He then puts his arms around the two of them and they both smile,though Tara appears to be smiling wider.

Guardian of My Heart

In "Guardian of My Heart", Cal dates Luanna, a customer of his who is fond of cheesy, romance movies (though this is revealed to be a front in order to get information from Cal). Tara, though impressed by his tuxedo, is jealous and "teasingly" asks who his date is. One of the villains, Amrod, falls for Tara at first sight and is willing to turn his back on Henri for Tara's love. Tara calls on her watch while Cal is on his date, and as he arrives, Cal knocks Amrod out saying, "Nice try, Romeo." Tara then flies off using a levitation spell to get to the tower in order to stop Henri from giving a frozen Sparrow in monster form to the "Mole" reporter (who is Cal's date). Amphrod shoves Cal off him and chases after Tara. After she refuses him outright, he decides to "force her love" for him using a charm from his collection. Tara ducks and Amphrod hits the reporter instead. Cal takes the charm from Amrod, telling him "You got wax in your ears?

She said 'NO'." Cal then launches into a short speech about how love is only real when it comes from two hearts. He also defensively adds that that magic could not change that (posibbly meaning his relationship with Tara) As he is being taken away by Chem, Amrod bids her farewell, calling her the "guardian of his heart". Tara mumbles those words after he is gone and comments out loud on how it is too bad he is evil (saying that otherwise, she would actually be willing to date

him). Cal is shocked and openly expresses so with a "Are you out of your mind?!". Tara grins in response (implying that she was playing on his jealousy, rather than being serious) and teases him about his reporter "girlfriend" (notably Tara leans onto Cal and places her hand on his chest like a lot of the episodes). The reporter appears in the end (a mentus spell was cast on her and Henri, so she does not remember going out with Cal) and asks to become a regular customer of Cal's video store. Cal, after receiving an encouraging look from Tara, launches into a mean rant of her. Despite the reporter leaving and threatening to "ruin him", Tara is notably happier and laughs as Cal begins to panic and run after her (perhaps because she believes that because of his comments, it is not likely she will forgive him and go out with him).

Assault on the Manor

We're not going to wait for Cal?" Livia, stepping up to interrupt Tara.

"Cal isn't here. If that's the reason for why you came,then I hate to burst your bubble!" Tara peevishly replying

"What! I didn't come here to see-" Livia blushing and stammering

Tara, interrupting, "In fact, try not to cry about it!"

Livia and Sandra crash Tara and Sparrow's game night with Edward and the twins. Before Tara can start the night off with a game, Livia interrupts her, asking her if they should wait for Cal. Tara becomes irritated at this point, snapping peevishly that Cal wasn't there. Tara openly displays aggression towards Livia for once, and notably it is only in the episode when Livia mentions Cal. Tara appears to be very much aware of Livia's feelings for Cal.

As If By Magic

Cal catches her and grins when he does so. He also smiles wolfishly when Tara wears Claudia's costume to assist David Merlin. He and Sparrow laugh at Tara's expression, and he says "You don't look that bad."  He also calls Tara "Tar-bear".

In this episode, Cal is dating a cute brunette girl who bought a cat and cat supplies from Sparrow's Pet Shop while he was running it for Sparrow. Tara appears to be very openly jealous and upset when he leaves the mission early to prepare for his date (arguing with him and scolding him).

While Tara is looking for the Golden Scepter in the library, Nelos, the antagonist harpy, attacks her with a torturous. Nelos confesses that she only wants the scepter to change her form for the man she loved, and Tara is quick to understand, saying, "I know that love can really hurt sometimes. Trust me, I've been there!"

It is possible that this statement may be from how she has to watch Cal eagerly go out on a date with a cute brunette girl.

In the end, Tara is with Cal at the Silver Witch while he waits for his date. The girl arrives smiling, and Cal stands up to greet her. However, she walks right past Cal and into the arms of another guy. The girl had been kidnapped by Nelos earlier, so Cal had to cast a mentus on her. Tara comments that evidently, he had cast the spell too hard and that now he was just stuck with her, beaming brightly.

When Tara goes missing, Cal immediately becomes concerned and searches for her. Later, when Tara falls off Gallant, Cal uses a transportus to catch her. When he does, his eyes sparkle. He does not let her go until Master Chem tells him too. Cal lets go of Tara reluctantly, still concerned, and blushes. This shows romance.

Cal jumping in the way to save Tara. 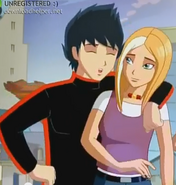 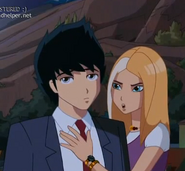