Fabrice Besois-Giron is a member of the Beta Team.

In "The Invincibility Cup", Tara reveals that Fabrice is a half-wolf (not a werewolf) but in other episodes they say Fabrice is not. He is the most recurring character out of the Beta Team. When he casts spells, his color is a light, almost wispy, blue.

Fabrice is a handsome young man with shaggy blond hair (same color as Tara's) and brown eyes. He wears a burgundy hoodie and jeans.

Fabrice was brought up as a nonspell until he found out he was a spellbinder. At first he thought that Tara's mutant powers were contagious but he was the son of a nonspell ambassador to Otherworld, according to Book One.

In Book Four he gets bitten by a werewolf, which might be why the TV series classifies him as half-wolf.

He is compassionate (as he unwittingly helps Henri before he kidnaps him, as well as later rescues Claire from the vampyres) and is the most outgoing out of the Beta Team. He is also very playful.

As a half-wolf, Fabrice is able to detect any traces of magic hours after it has been cast in his wolf form.

He is good friends with Robin and Fafnir. Together they are the Beta Team.

Tara considers him as her little brother, worrying over him when he first visits Rosemond. In "Brothers in Fangs", it is revealed that Tara has known him ever since he was a little boy (it is implied from this statement that she is older). She is notably sad and left out when she watches Lycos and Fabrice howl at the moon together in wolf form.

Lycos is a "half-brother" who Fabrice is also pretty close to. However, it should be noted that his half-brother is only related to him because he is the one who "turned" Fabrice. (In the wolf pack, they call it "Brothers in Fang"). When Fabrice did not return in time in order to prepare for the red moon, Lycos came to earth to hunt for him. He would have immediately stormed Henry Delachasse`s Estate, had Tara not attempted to hold him back. He then attacks Henri when he hears Fabrice howl in pain.

Fabrice appears to act as a friend/older brother to Fafnir, teasing her and playing around with her. Notably, the two appear to be closer to each other than to their leader, Robin.

The two's only interaction is in Clairvoyant. However, it appears that the two were mutually crushing on each other (it is implied that Claire liked Fabrice, but it is clear that Fabrice was infatuated). It should be noted that Fabrice has "saved Claire's life" two times, and that he was upset when she was revealed to have been using them (him).

The two get along quite well, and it seems that Sparrow is overall impressed with Fabrice and his hunting skills. In one episode, it appears that Sparrow may have a crush on Fabrice, though she is already involved with Edward romantically. While this was only one episode, she is his girlfriend in the book series. 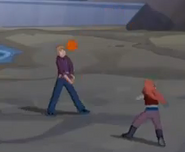 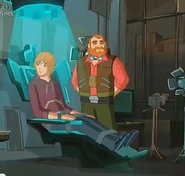 Fabrice waving goodbye to Tara
Add a photo to this gallery
Retrieved from "https://taraduncan.fandom.com/wiki/Fabrice?oldid=11296"
Community content is available under CC-BY-SA unless otherwise noted.