Manitou is a supporting character in the show. He is Tara's great-grandfather, and Isabella's father. He accidentally turned himself into a talking dog, but comments that it actually isn't so bad. He assists Isabella in raising Tara, as his granddaughter, Selena Duncan, is not shown in the series.

He is fond of gourmet food, but Isabella keeps him off of it, claiming that he'll be "healthier" that way. He is also more laid-back than his daughter, and he usually attempts to sway Isabella whenever Isabella and Tara argue.

Manitou's personality as a youth is also implied to be very similar to Cal's, as in "Volcan Heart", Manitou states that when he was his [Cal's] age, he sent a valentine to every pretty spellbinder on the block. 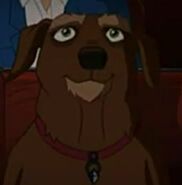 Manitou
Add a photo to this gallery

Retrieved from "https://taraduncan.fandom.com/wiki/Manitou_Duncan?oldid=10884"
Community content is available under CC-BY-SA unless otherwise noted.