Robin M'angil is the leader of the Beta Team.

A half elf who always appears to be a possible love interest of Tara in any episode that he is in. He is also the leader of the Beta Team (and when Tara is not well enough for Alpha, he is leader of Alpha; when Tara and Sparrow are both sick, Robin claims superiority in position over Cal.)

He is extremely talented with magic, but uses an enchanted bow and arrow on some occasions.

He has a slightly strained relationship with his father, T'andilus M'angil.

He has blue eyes along with grey hair. He is taller than the females of the series and is about the same height as the other males of Tara Duncan.

Robin is very take-charge. He is also very serious and will hardly joke around (this is another reason why he clashes with Cal; their personalities are complete opposites). He can also be very haughty, as he constantly acts that he's better than Cal and nonspells.

However, he is also very close to his Beta Team teammates, Fabrice and Fafnir, often acting like family with them.

He is good friends with Fabrice and Fafnir, as they are able to effectively function as the Beta Team.

In the episodes that he appears in, he is always either flirting with Tara or competing against Cal (which is speculated to be for Tara's affection).

Robin's father who he has a strict and formal relationship with at most.

The two appear to be close friends, as when Sparrow sees him, she gives him a big hug. When he supposedly "betrays" them, she is very hurt and transforms (which can only be done in strong emotions). 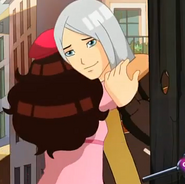 Add a photo to this gallery
Retrieved from "https://taraduncan.fandom.com/wiki/Robin?oldid=10821"
Community content is available under CC-BY-SA unless otherwise noted.