Start a Wiki
"The Naughty Little Vampire" is the twenty-sixth episode of Tara Duncan and seems to have cancelled the entire series.

Master Chem gives the Alpha Team a new assignment: they must watch over the son of the President of the Land of Vampires on Otherworld and protect him from Serena who is trying to kidnap him.

Little Vlad’s stay at the Manor is going to be all action for Tara, Cal and Sparrow as the little guy has one thing on his mind: to become a Semchanach! Meanwhile, Tara has to represent her school in a street ball tournament.

The Alpha Team must babysit a rather annoying little vampire boy, Vlad. His father, Con Tempos, is the President of the land of the Vampires. Tara, Cal, and Sparrow must protect the obnoxious brat from Serena, who plans to kidnap him for ransom. She demands that if the mayor wants to see his son alive, he must give her the command over the vampire army troops.

Meanwhile, on Earth, Tara is trying to get in the basketball team with The Cryista Brothers, but Sandra and Livia keep annoying them and adding pressure to Tara when she shoots free throws. 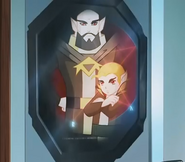 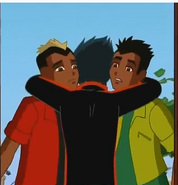 Add a photo to this gallery
Retrieved from "https://taraduncan.fandom.com/wiki/The_Naughty_Little_Vampire?oldid=11213"
Community content is available under CC-BY-SA unless otherwise noted.